ASTM A572 steel plate is a popular grade of high-strength low-alloy (HSLA) steel that is typically used in structural applications. A572 steel contains chemical alloys that enhance the material’s hardness and ability to bear weight, and this material is lightweight relative to steel grades with similar compositions.

There are five different grades of A572 steel plate: Grade 42, Grade 50, Grade 55, Grade 60 and Grade 65. Each of these grades have slight differences in their mechanical properties and chemical compositions, which may make them more fitting for certain applications. A572-50, however, is the most common A572 grade.

Leeco® Steel stocks the following standard sizes at our distribution centers, but other sizes may be available for special orders.

A572 steel plate is lightweight, yet offers great strength, ductility and machinability, making it ideal for use in structural applications. These properties make A572 relatively simple to shape into different structures while also maintaining the ability to bear great stresses and loads. A572 is also one of the most economically priced grades of steel plate.

The chemical composition and mechanical properties of A572 steel plate are governed by ASTM code. While ASTM regulations are widely accepted around the world, some countries or projects may require steel plate materials that meet other standards. For projects requiring EN standard steel plate, S355 may be able to be used in place of A572, as these grades are generally considered equivalent.

While not exact equivalents, other mild carbon or HSLA plate grades – such as ASTM A36 – may also be suitable for similar applications, as these grades often have similar chemical and mechanical properties.

A572 steel plate is typically used in various structural applications due to its ability to bear heavy weight while still being relatively light and machinable. Some of the most common infrastructure applications for A572 plate include bridge construction and building construction.

While most commonly used in the infrastructure sector, A572 plate is also widely used in other industries, including:

The following material properties are ASTM specifications and will be confirmed on the Mill Test Report.

The following composition properties are ASTM specifications for the A572 grades.

Other alloys can be used at the discretion of the producer, but is limited to the ranges of four types: 1, 2, 3 and 4. Types 1 and 2 are the most common and are specified below: 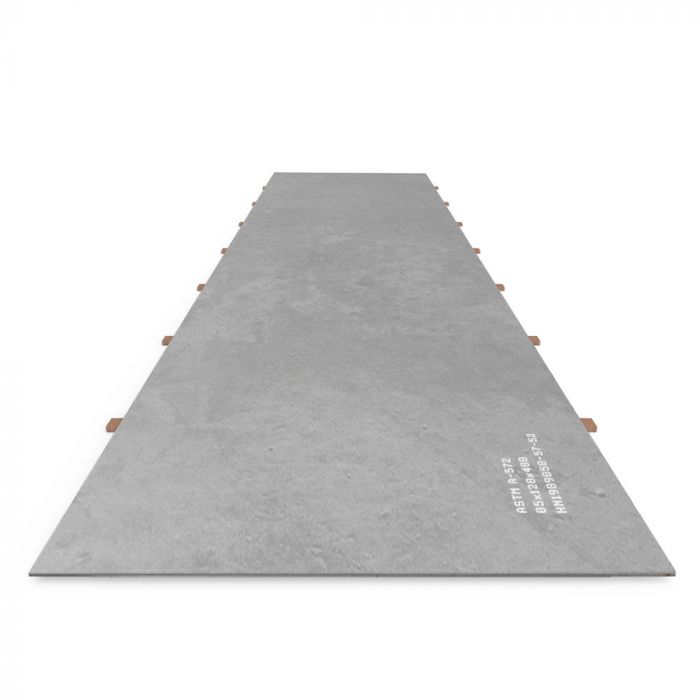