From skyscrapers to bridges to stadiums and roads, steel is one of the most widely used materials in the world. Steel plate – or steel that is greater than 3/16-inches thick – is used in a variety of applications, including infrastructure construction, construction equipment, bridges, buildings parts fabrication, wind turbines and armored vehicle production.

This article will review the most common types of processes and highlight the differences between them.

Steel plate often has a thin layer of mill scale, which occurs during the manufacturing process. In most applications, the presence of mill scale is acceptable, as it does not compromise the strength or integrity of the material. However, in applications that require a surface to be painted – such as use on armored vehicles – mill scale must be removed (otherwise the paint will simply flake off over time).

Shot blasting – also referred to as abrasive blasting – is a common method used to clean and polish steel plate. The technique uses steel shot about the size of a grain of sand and blasts that abrasive at the material surface. The abrasive combined with its force effectively removes surface residue but does not damage the steel plate. 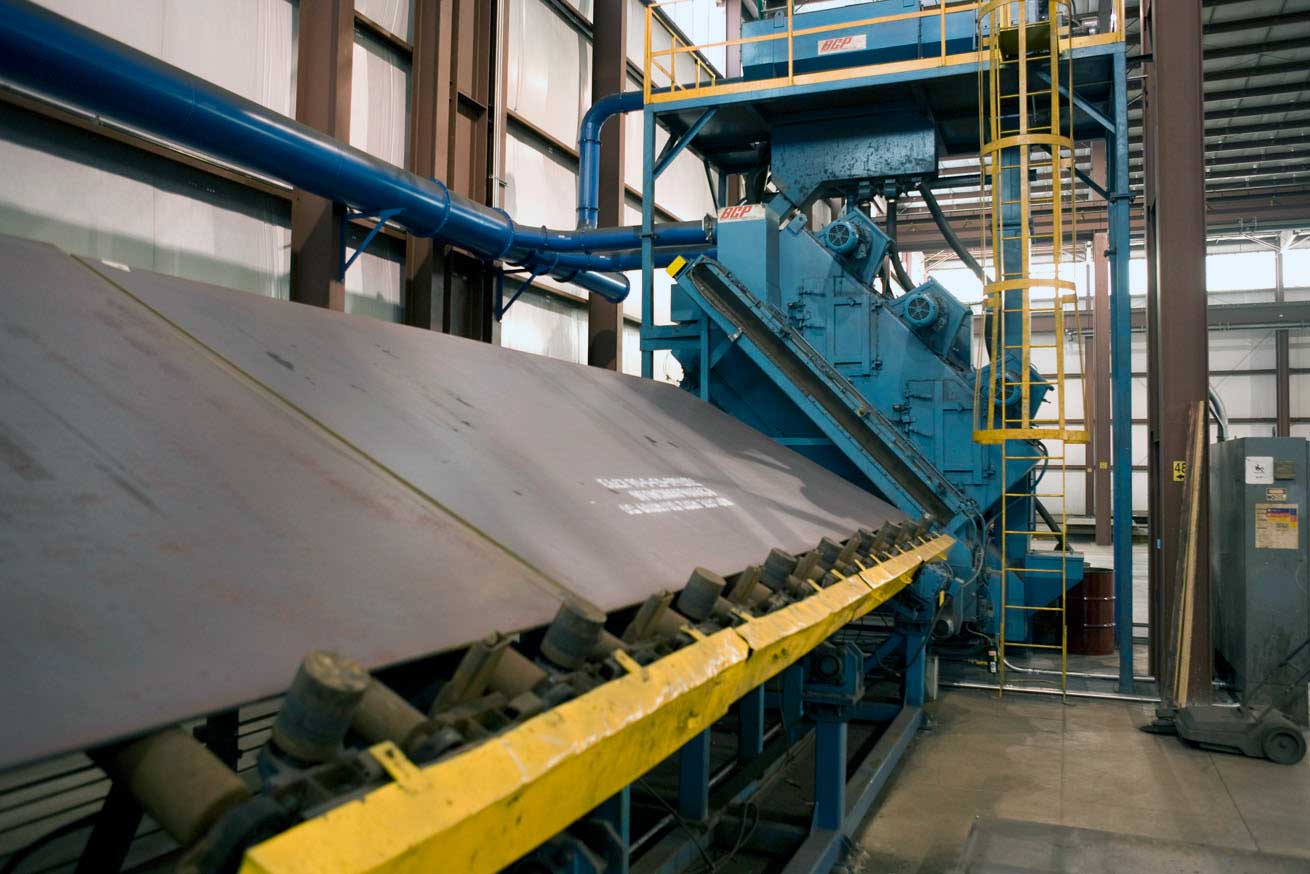 Shot blasting differs from its cousin, sand blasting, in that sand blasting combines the abrasive material with compressed air, which flows through a blasting nozzle. Shot blasting, on the other hand, uses a throwing wheel that rapidly spins and propels blasting material inside a contained area. This greatly reduces silicon dust and general environmental pollution.

The cost of shot blasting depends on a lot of factors, but typically ranges from $80-$160 per hour. There are sometimes minimum plate size requirements, so it is important to discuss your material needs with an experienced steel plate supplier or processing vendor.

#2: Cutting to Size on the Burn Table

Steel material is popular in construction applications due to its strength in relation to weight and ductility as compared to other high-strength materials.

Just because it is more ductile (or formable) than other construction materials, doesn’t mean it’s easy to cut, drill and weld.

For this reason, processing vendors offer cutting services, the most popular being flame cutting. Flame cutting uses a heat source to cut into hard, thick steel plate material on a large table.

There are several methods of flame cutting, including:

Oxy Fuel Cutting: This process uses a flame that heats the material surface, followed by a blast of oxygen along the cut line. Oxygen greatly increases the temperature of the flame, effectively “cutting” (or burning away) the material. Oxy fuel cutting is less precise and slower than other cutting methods - however, it can cut much thicker material.

Plasma Fuel Cutting: Plasma cutting uses a channel of compressed, superheated, electrically ionized gas to cut into steel and metal materials. Plasma cutting is more precise and faster than oxy fuel, and is limited by the thickness it can accurately cut. 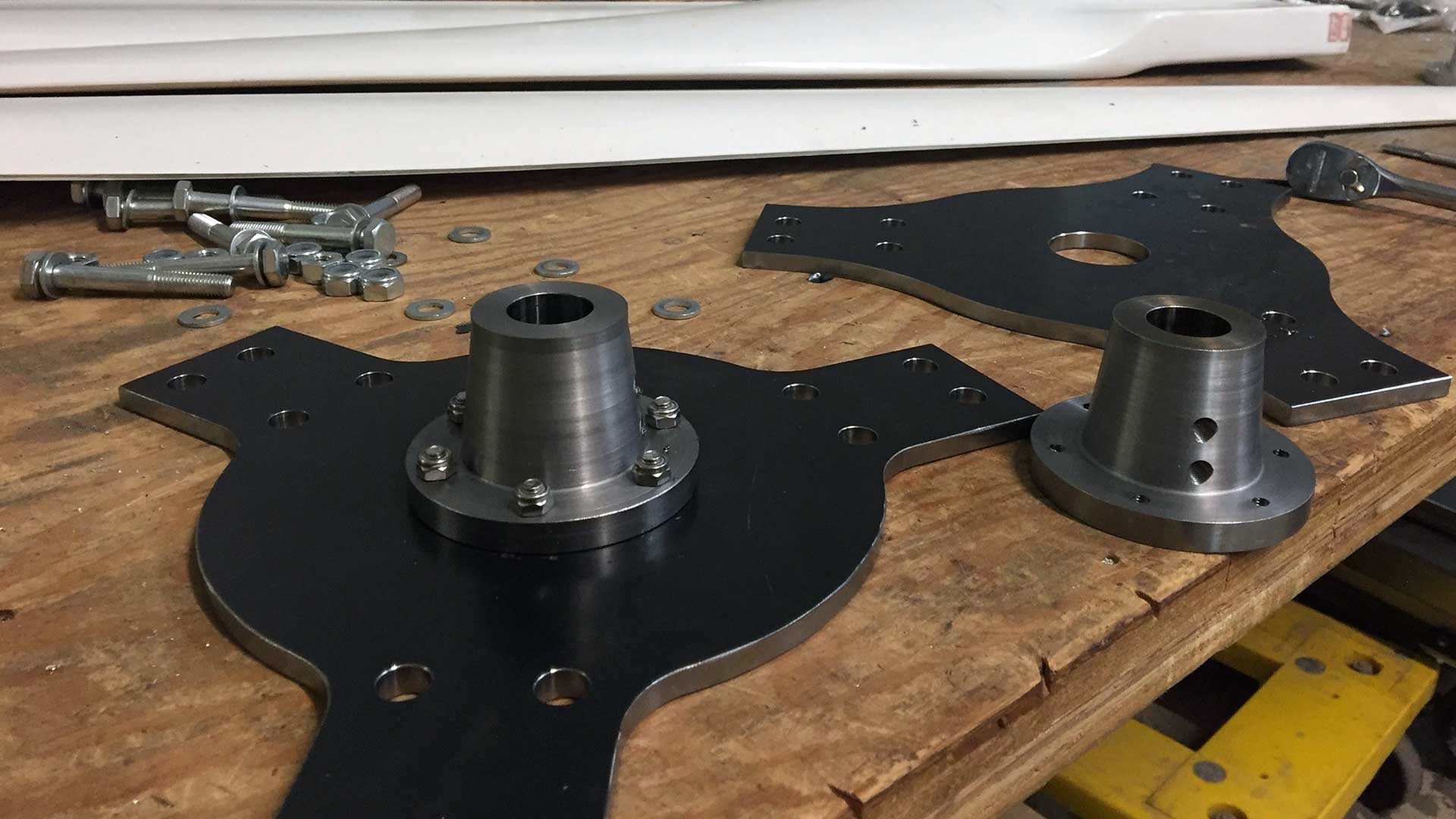 #3: Cutting to Size with Sharp Objects

There are two common ways to cut thinner steel plate that do not require a burning method. Typically, these methods are less expensive.

Shearing: This method is sometimes referred to as die cutting, as it involves the use of a press with die cutting plates to cut steel. The process is similar in concept to using large, heavy scissors. Like saw cutting, shearing can typically done on plate up to 1-inch thick, and is typically used to cut a plate into bars.

#4: Reducing the Thickness of Plate via Blanchard Grinding

While burning and cutting methods are effective at changing the dimensions of a steel plate, reducing thickness requires a different technique known as rotary surface grinding or Blanchard grinding.

Blanchard grinding uses a magnetic circular table that firmly secures the steel plate. The circular table rotates under a grinding spindle, resulting in a uniform grind across the material surface.

For materials that require precise drilled holes, steel plate processors have software-based drill presses that can handle drilling through hard, thick material, and can do so in a highly-precise manner.

Some processors have 3-in-1 or 2-in-1 machines that both cut and drill. These machines are precise and efficient, making them good options for customers with multiple processing needs.

#6: Bending via a Press Brake

Metal fabricators in particular often need steel plate formed to a certain angle. There are multiple methods of forming, and a press brake is almost exclusively used when bending steel plate.

Press brake bending – also referred to as coining – uses a punch and die to form flat plate into a specified angle. This method is highly accurate and precise, making it an ideal option for fabricators.

Construction applications – such as producers of towers – require steel plate to be bent and rolled into a circular or tapered round shapes using a plate roll machine. These machines feed steel plate (and other metal materials) into three or four rollers, which curve the material to a specific angle.

Press brakes can also be used to roll steel, but plate rolls are more effective at rolling 360-degree cylinders as well as larger, thicker plate.

Leeco® Steel is a leading supplier of steel plate and offers some of these processing services at our nine distribution centers across North America. Contact Leeco Steel today to learn more about the services offered near you.